Chelsea arrived by cab at the Eiffel Tower. But Jason didn’t do anything alike. Instead he rented a Vélib. Vélib is a public bicycle sharing system in Paris. Jason signed up for it and took a rental bicycle to get to the meeting point the morning of his Eiffel Tower elopement. This made for lots of laughter when everybody saw the groom arriving on a bicycle. So the first pictures of Chelsea & Jason on their wedding day in Paris include a rental bike. 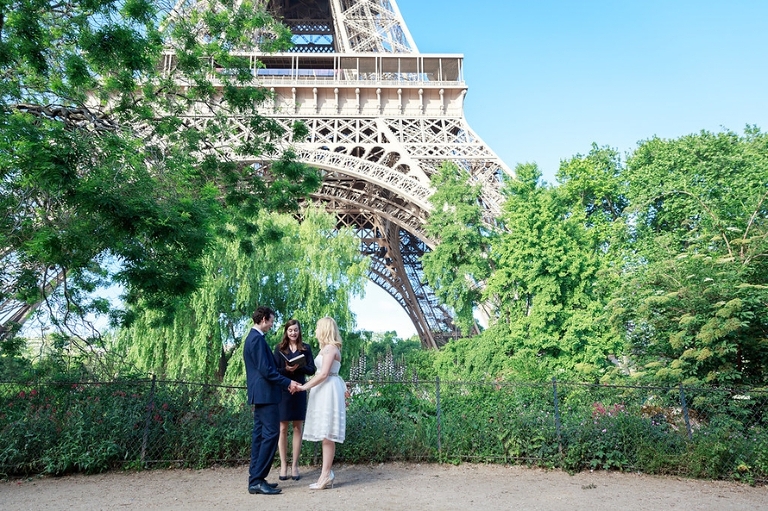 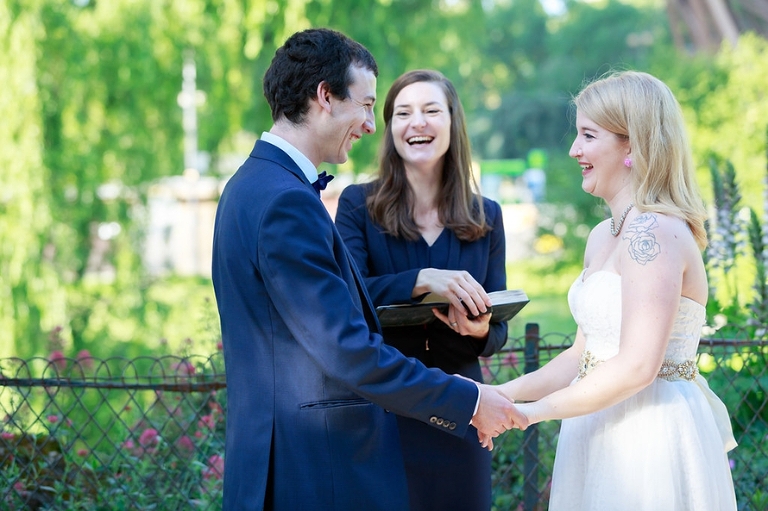 Elopement ceremony on the foot of the Eiffel Tower

As their Paris officiant I prepared a romantic wedding ceremony for the couple from Vancouver, Canada. Chelsea & Jason wanted to integrate their personal wedding vows into their Eiffel Tower elopement to make the moment more personal. They also sent me, their celebrant in Paris, their favorite wedding reading with blessings for their marriage.

Jason & Chelsea exchanged wedding rings as a sign of their commitment. Jason had already given Chelsea another sign of his love before their Eiffel Tower elopement in Paris: a tattoo of a bird that Chelsea always wanted. It will always remind her of their beautiful love story and wedding day in Paris. 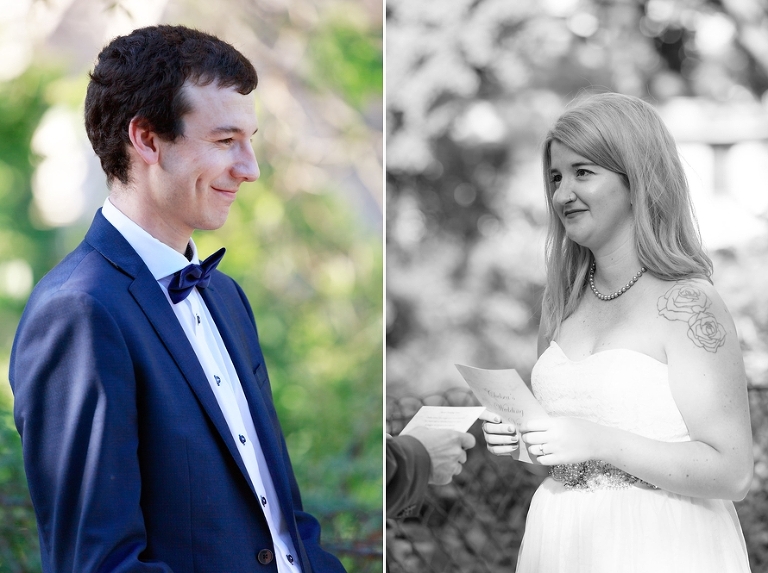 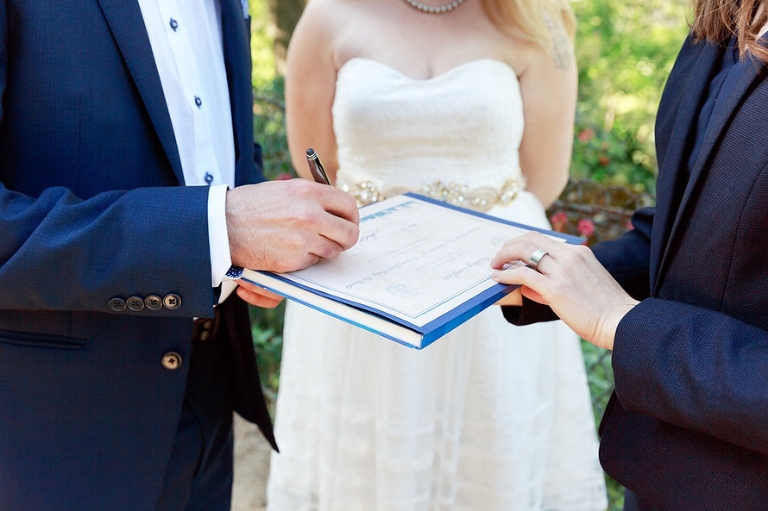 Not just this wedding gift is pretty offbeat but also Chelsea’s choice of wedding dress. She chose a very special vintage wedding gown, which looked gorgeous on her! She found it in a shop that is selling donated bridal gowns. The profits of this second hand bridal store go to cancer charities. Chelsea did not only get an exceptional wedding dress but also did something good and sustainable.

After their Eiffel Tower elopement ceremony Jason & Chelsea moved on to beautiful Montmartre area in Paris. They tried different colorful Cafés in Montmartre, kissed on the stairs in front of Sacre Coeur with a view all over Paris and had their first snapshots taken in a vintage photo booth! 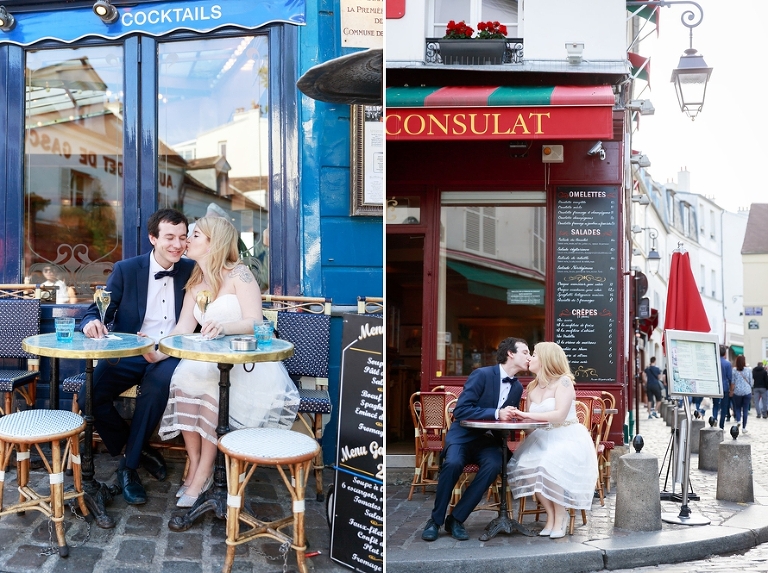 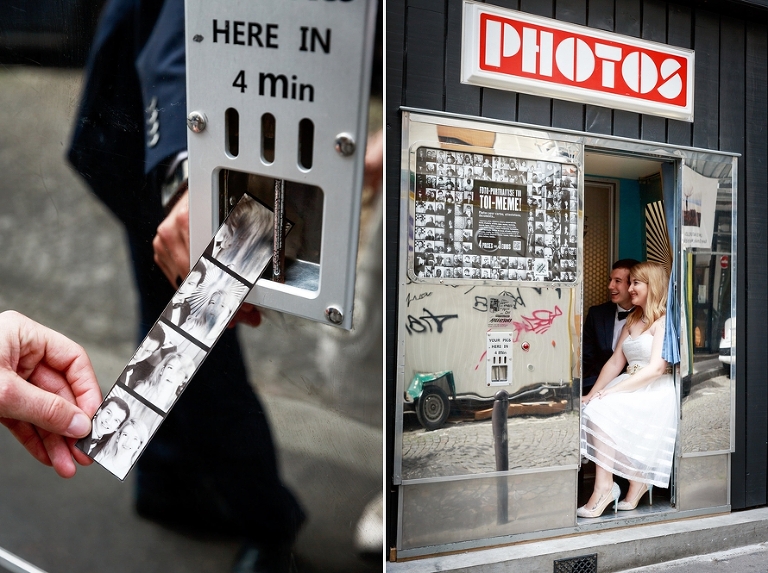 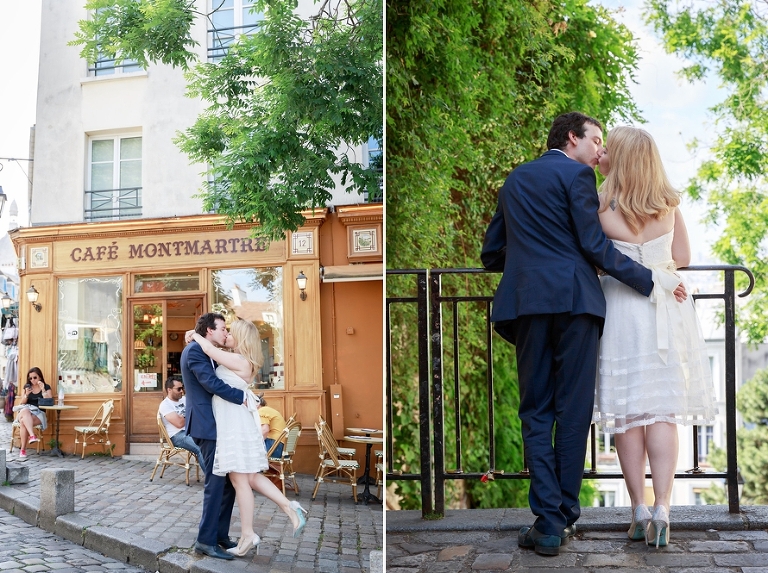 Vendors of this Eiffel Tower elopement in Paris:

“Laura made great recommendations for everything, performed an amazing ceremony and gave us very nice keepsakes of our wedding ceremony. I would definitely recommend The Paris Officiant!”