This Eiffel Tower vow renewal ceremony in Paris with an amazing view from the Shangri La hotel not only looks stunning. More importantly: The unbelievable love story of Mery & Juan shows how incredible love is – and touched me deep within!

It was Juan who had the idea of renewing wedding vows for their 25th wedding anniversary. At first Mery was not sold on the idea. They had a big wedding 25 years ago. Mery didn’t feel like go through wedding preparation once more.

As the anniversary date approached Juan became more persistent with the idea. Mery and her two gown up daughters joked that Juan just would have to ask properly. Three weeks later Juan surprised Mery me with a second marriage proposal. He asked her to renew vows and Mery finally said “Yes”. 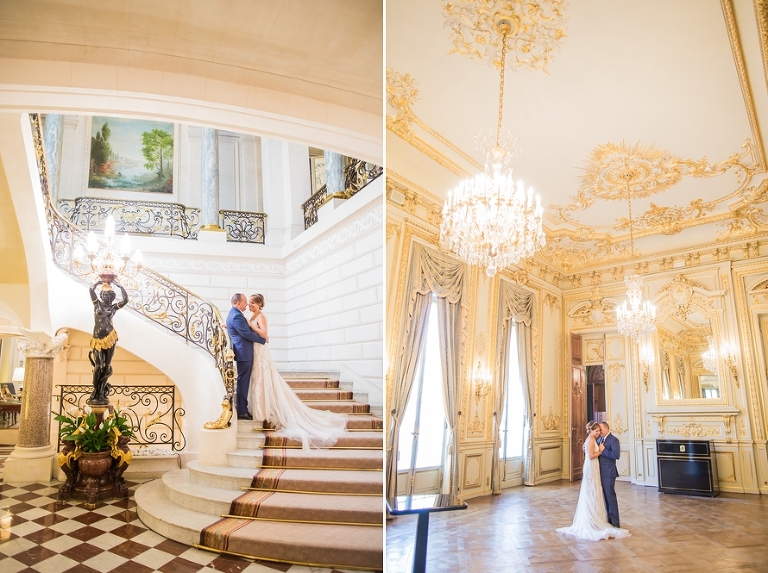 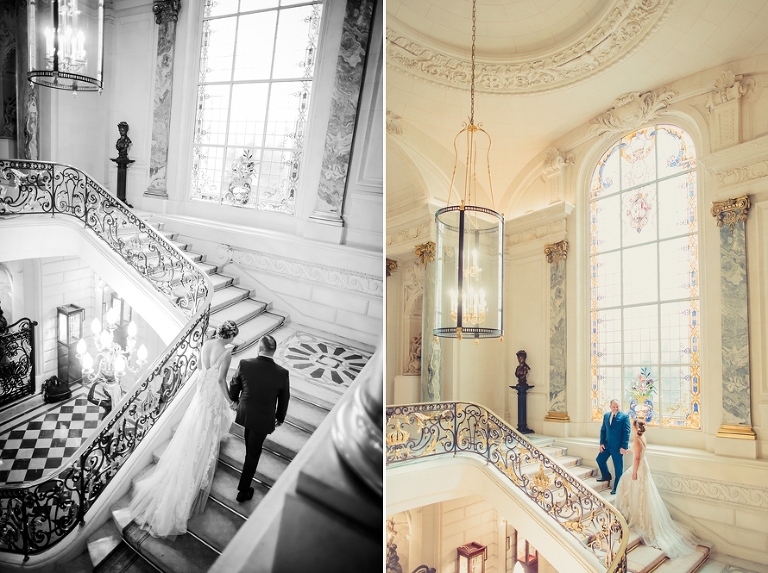 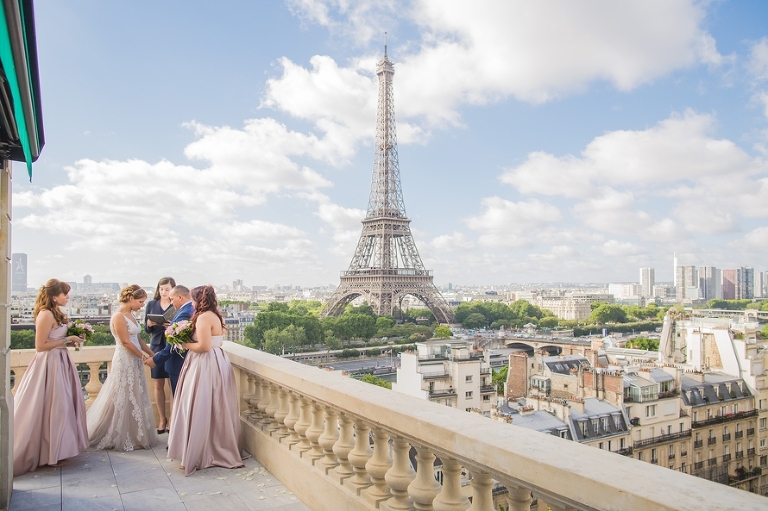 Mery & Juan decided to have their wedding vow renewal ceremony in Paris. Together with their two daughters they travelled to Paris for the very first time. Mery said: “From the initial preparation we decided we wanted a private and intimate renewal of wedding vows.

As their Paris officiant I prepared a slightly religious ceremony for Mery & Juan. This was important for the couple since they were initially married in the church. Mery & Juan also wanted to incorporate their personal vows into their vow renewal ceremony. 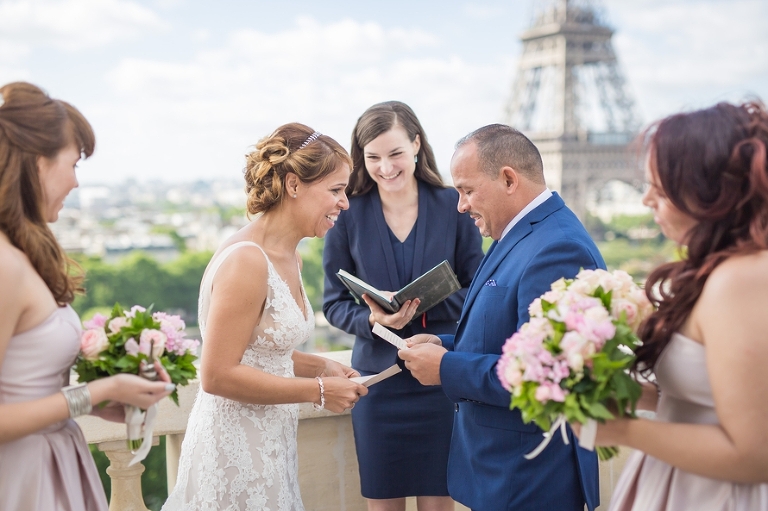 Mery said: “One of my favorite moments of our vow renewal ceremony in Paris were our wedding vows which we wrote and kept secret until that moment.”

Besides the couple also wanted to include their two daughters in the ceremony. Mery said: “When our girls were much younger they would get very upset when they saw our wedding photos. They ask why they were not on the photos and why we didn’t invite them. We always had to explain to them they were not born yet.”

Their two daughters are grown up now and of course understand why it was impossible to invite them to their parents first wedding. Mery & Juan still wanted to make sure that this time their two daughters played an important role during the renewal of their wedding vows in Paris. Mery said: “This time we want to celebrate are paris vow renewal ceremony with the only two most important people in our lives who were not present in our first wedding.”

Mery & Juan told me, their celebrant in Paris, that they wanted to surprise their two daughters during their Eiffel Tower vow renewal ceremony with a ring for each of them. The couple engraved a word that each of the girls chose as their life intent in the inside of the rings. Mery said: “Having our daughter present to witness our day was quite emotional and surreal. But seeing them get emotional was even more special for us. Surprising our girls during the vow renewal ceremony with a ring was unforgettable for us and even more for them.” 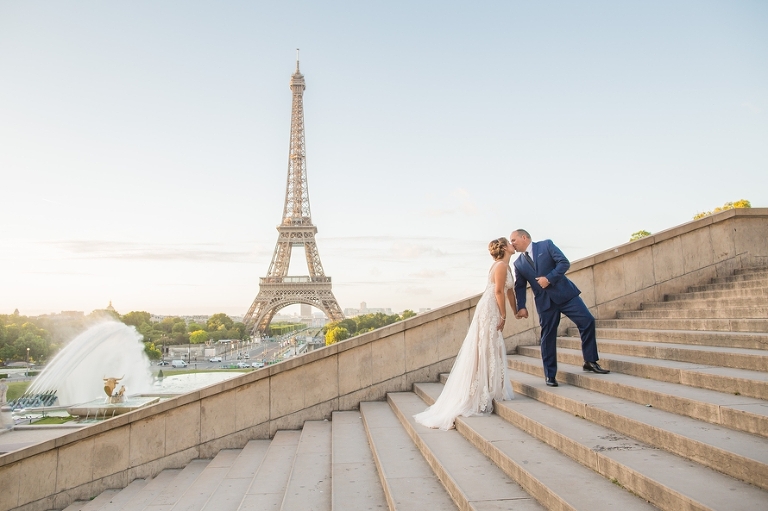 As Mery & Juan’s English speaking celebrant in Paris I made sure to write a meaningful and personal Eiffel Tower vow renewal ceremony in which I included their incredible love story: Juan and Mery met 30 years ago at the birthday party of Mery’s cousin at her grandparent’s home in New York. Mery just turned 13, Juan was 16 years old. Mery & Juan said: “It was love at first sight!”

They dated for 5 years until Mery reached her 18th birthday and they could finally get married. 25 years ago they celebrated a big wedding with 300 guests. All their family and friends attended. 25 years later Mery & Juan are still inseparable and wanted to celebrate their enduring love by renewing vows in Paris. Mery said: “Renewing our wedding vows in Paris was the best thing we could ever done! Our vow renewal was very emotional as we reflected on our journey and how we managed to stand together. Most importantly it is a reflection of how destiny brought us together on that infamous day 30 years ago.”

As their Paris officiant I wish Mery & Juan and both their two daughters all the very best for their future. May it be filled with joy, love and laughter! And for all of you out there who gave up on love Mery has an encouraging advice: “For those who may not believe in “Love” or in “Love at first sight,” I recommend you take a second look and think again, it exist!”

“WOW!! Laura exceeded our expectations for sure! She was just as excited as we were to celebrate our 25th Wedding Anniversary and perform the renewal of our wedding vows. Working with Laura was a stress free experience. Since having my first wedding I know how stressful preparing a wedding can be. But Laura made it so easy!

She made our ceremony everything we ever wanted and more! We cried and laughed! But most important she made it so special and ours! I was very impressed with her attention to details!!! She incorporated our love story to the ceremony, which was important to us. She made our ceremony one we will never forget!

For any couple considering planning a wedding, regardless if it’s your first or if you are renewing your wedding vows, hiring the right vendors (Photographer, Officiant, Hair/Makeup etc.) are very important factors and will make a big difference on the outcome of your wedding day, but most importantly the experience will last you a life time.”