You would love to enjoy a quiet and serene moment for your symbolic ceremony? You want to celebrate your love and the emotions that come with it without too many strangers looking at you? I completely feel you! That’s why I as your Paris Officiant would warmly recommend to choose one of the gorgeous parks and gardens for your elopement ceremony in Paris. They are beautiful, romantic and far more intimate and quiet than the famous landmarks!

The Eiffel Tower or Louvre may have been your first idea thinking about a backdrop for your elopement photos! I totally get you and you don’t have to miss out on these sights! Here is my suggestion: Why not first taking couple pictures at the famous landmarks and then moving to a quieter location for your elopement ceremony in Paris? This way you have the Eiffel Tower and Louvre in your elopement pictures, plus you can enjoy intimate moment for your ceremony. In a romantic park or garden you get to exchange your promises and celebrate your love in a calm and serene surrounding.

Sounds good? Then let me introduce you to my favorite parks and gardens in Paris! I will show you several elopement and vow renewal ceremonies that that I officiated at these romantic and intimate locations. I hope you’ll enjoy! 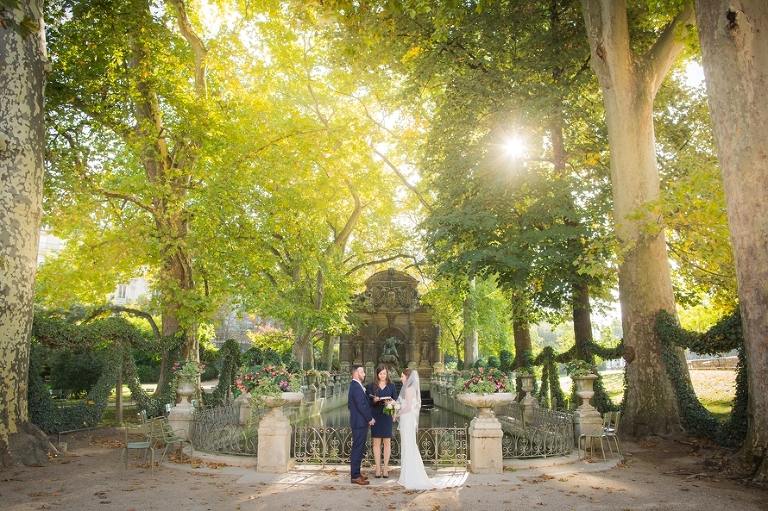 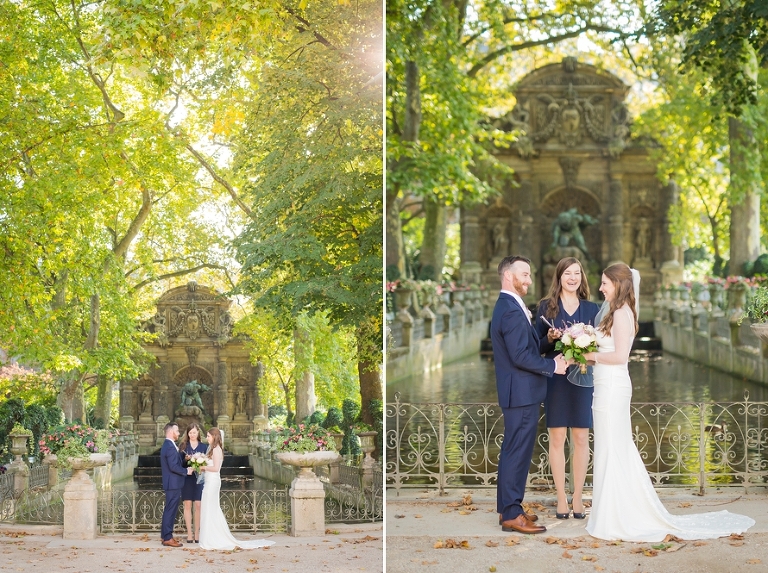 Sara & Matt chose the Medici Fountain for their elopement ceremony in Paris. They started with a photo shoot at the Eiffel Tower and then headed over to the Luxembourg Gardens to exchange their personal wedding vows. This whimsical ceremony spot in Luxembourg Gardens works especially well in summer as you can see on Sara & Matt’s elopement pictures. In summer the trees are lush and green, the stone vases overflow with colorful flowers and the sound of the gurgling water in the fountain makes it even more peaceful and serene. The Medici Fountain is also very pretty during autumn foliage when the leaves change color. But even in winter when trees are bare also the fountain alone can be a nice backdrop. 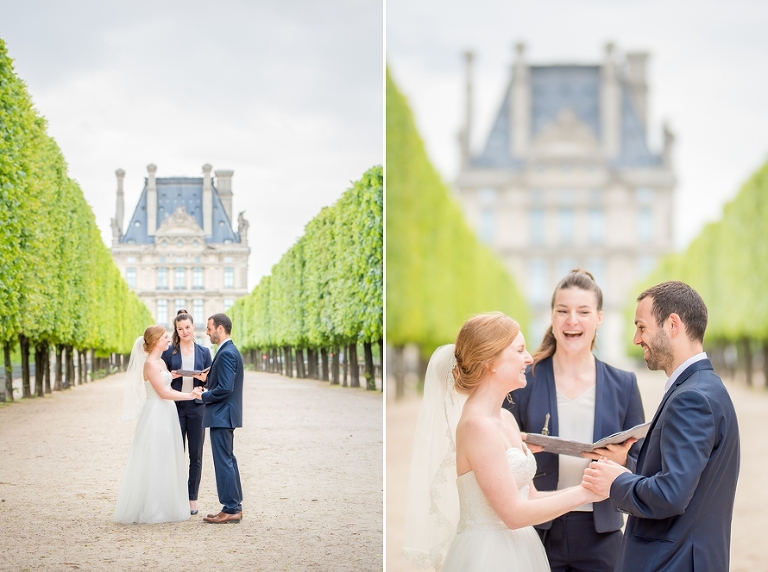 For their elopement ceremony in Paris Bailey & Gino decided for this lovely alley in Tuilerie Gardens. You can see the Louvre Palace in the background which means the Louvre & Pyramid are not far. So you can easily combine this ceremony location in the Tuileries with a photo shoot at the Louvre. Moreover this alley is calm and quiet and allows you to have an intimate celebration. You will mainly encounter Parisians there doing their morning run or walking their dog – and actually Bailey & Gino were quite enchanted by some unexpected cute & furry wedding guests!
Bailey & Gino elope to Paris in summer so the alley was lush and green. But also without leaves you still have the impressive Louvre palace in the background. 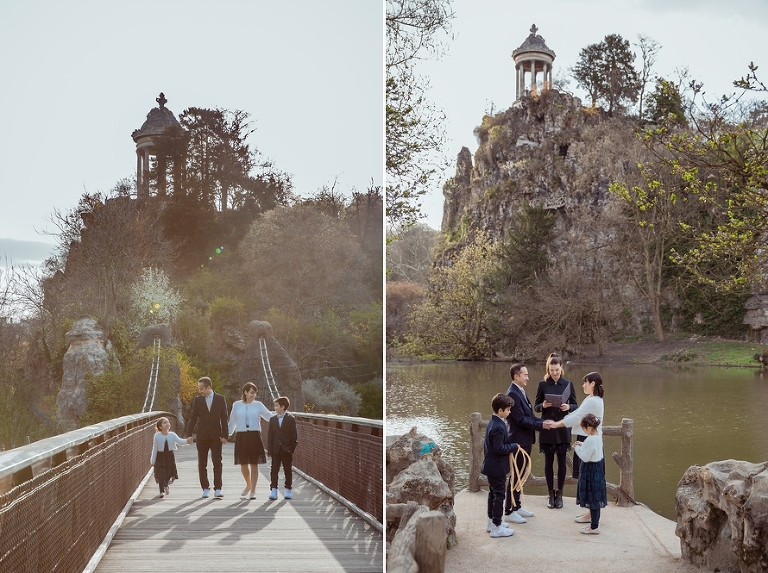 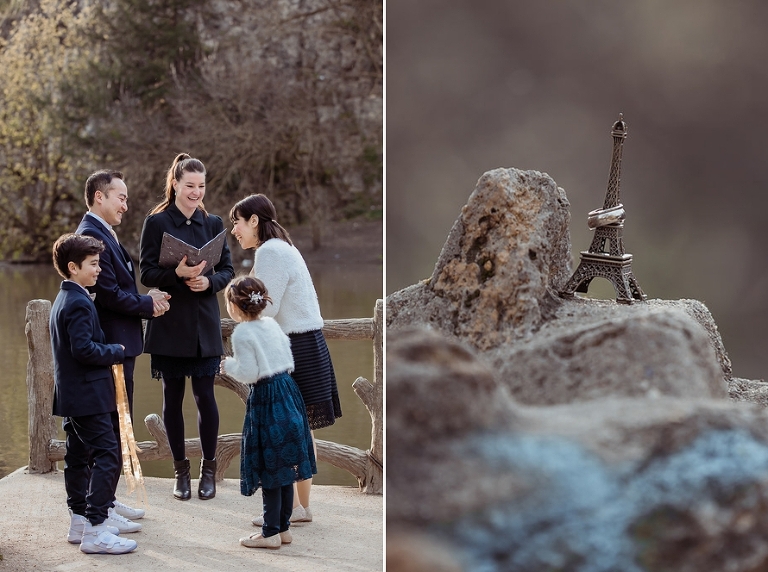 Beth & Bryan came to Paris to renew their wedding vows after 12 years of marriage. They were looking for a quiet and intimate spot and wished to be near a lake and surrounded by nature. As their Paris Officiant I suggested the lakeside at Parc des Buttes Chaumont. This spot is magical! We were very close to the water and the island with temple on a steep cliff is just such a sublime backdrop! In the morning we were completely alone at this location which helped the kids feel comfortable enough to perform readings for their parents that they had written for them. We also incorporated handfasting as a family ritual into the ceremony. By binding their hands and tying a knot the family symbolically strengthened their bonds. 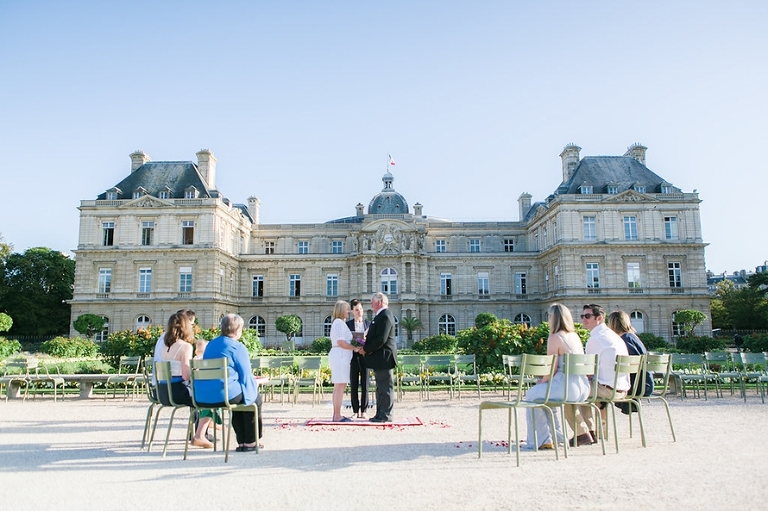 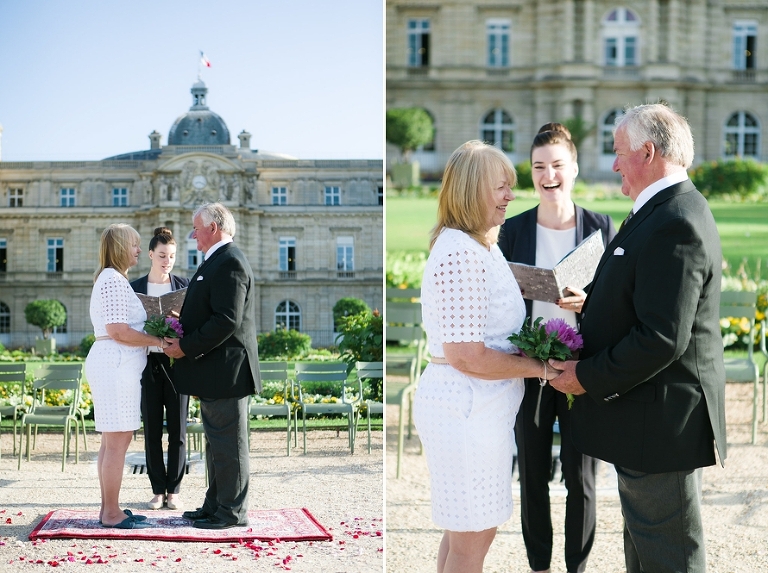 Sue & Jim fell in love with each other a little bit later in life. This had the advantage that their children and grandchildren were able to witness their elopement ceremony in Paris. What a sweet moment it was when their little grandson brought them their wedding rings!
The location in front of Luxembourg Palace worked perfectly for their ceremony: The ceremony decoration – an oriental rug and red flower petals – was a nice contrast to the whitish ground. Their guests could also use a few chairs that belong to Luxembourg Gardens to sit down and witness the celebration. This elegant spot works all year long and looks actually best with cloudy weather – so no need to feel desperate when the sun won’t show up on your wedding day! 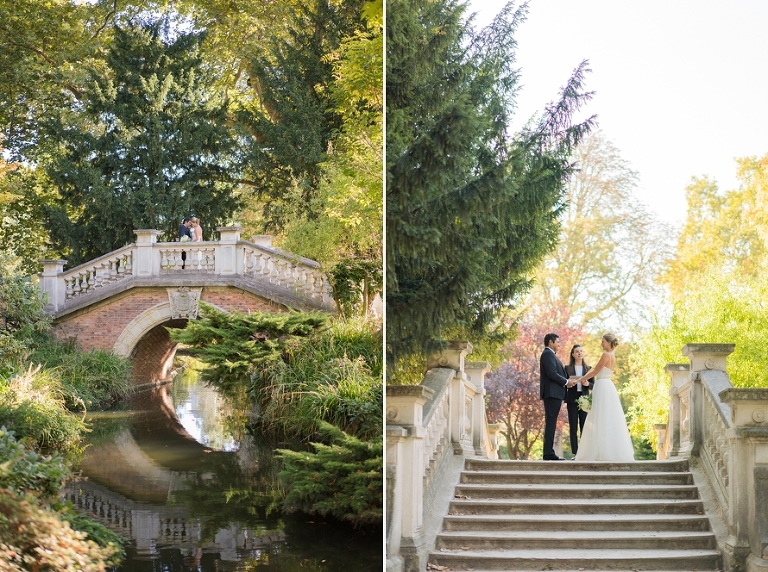 Rebecca & Antonio fell in love with Parc Monceau instantly! They even skipped the Eiffel Tower view from the balcony of their hotel room and preferred this romantic park for their elopement ceremony in Paris. They adored this whimsical little bridge in the park and chose it as location to exchange their wedding vows. Fun fact: This bridge was modeled after the Rialto bridge in Venice, Italy. What a coincidence that Rebecca & Antonio would head to Venice to attend a friend’s wedding right after their own Paris elopement!
Autumn foliage had just started when the couple eloped to Paris. The different colors of the autumn leaves looked gorgeous on their elopement photographs. Parc Monceau looks especially pretty when the trees have leaves but also has it’s charm in winter. 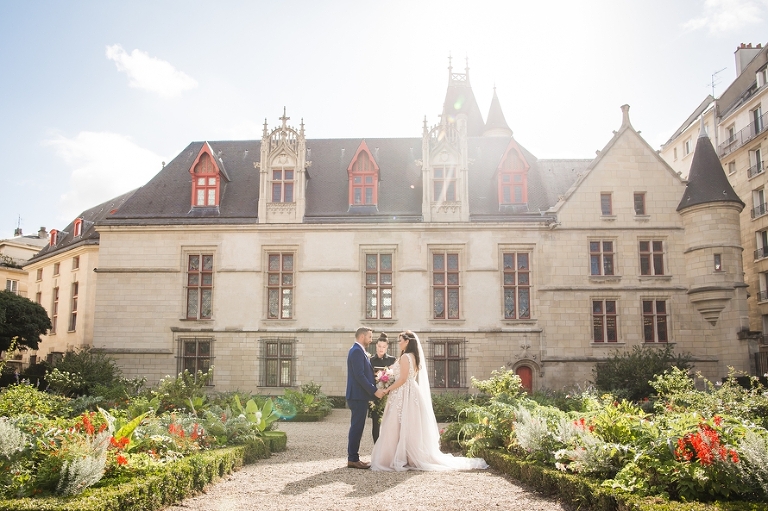 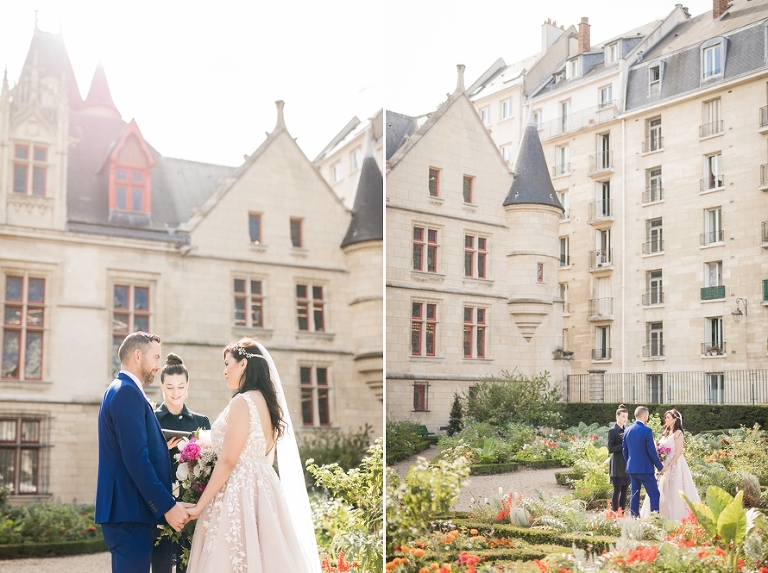 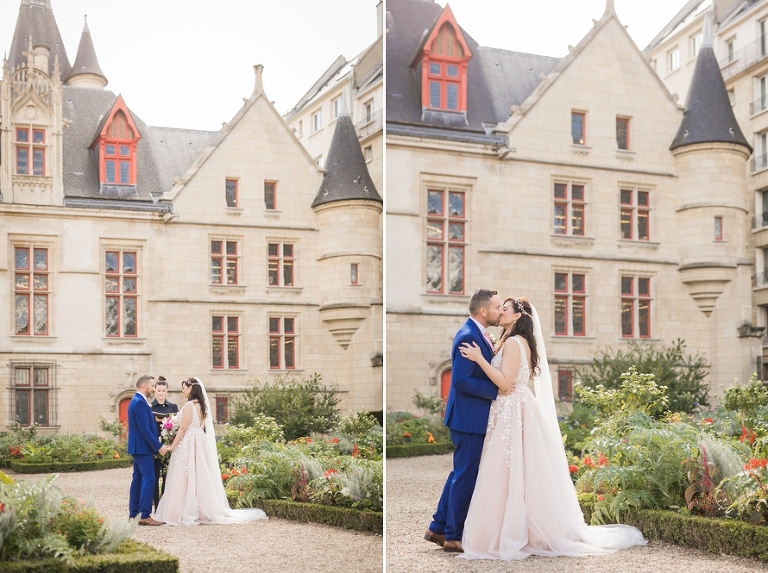 You don’t have to decide between a secret garden ceremony and an elopement with a medieval castle as a backdrop. In Paris you can have it all! Jessica & Martin were very happy when I suggested this spot as their celebrant in Paris. The castle was perfect because Jessica had always dreamed about a princess wedding. But they also liked the idea of having a secret garden for an intimate and romantic ceremony.
The couples eloped to Paris in summer, so the flower garden was in full bloom. This place looks especially pretty when flowers are blooming. But even without the flowers the castle alone is still a stunning backdrop all year round.

Stephanie & John had the coolest elopement project I have ever heard of! They made a trip through Europe and got married in three different countries: First they had a small wedding celebration with family in Ireland, then they exchanged vows in Italy’s capital Rome and completed this romantic trip with an elopement ceremony in Paris. They had their hearts set on Parc des Buttes Chaumont. The temple of Sibylle on top of a steep cliff turned out to be the perfect ceremony location. It was fitting so well to Stephanie’s wedding gown reminding me of a goddess-like roman tunic. Besides it made me feel like I wasn’t an officiant in Paris but a high priestess in ancient Rome!
Autumn foliage had just started when the couple eloped to Paris. The different colors of the autumn leaves looked stunning together with the dramatic canyon and sublime landscape. But the temple of Sibylle alone is a gorgeous spot for your ceremony all year round. 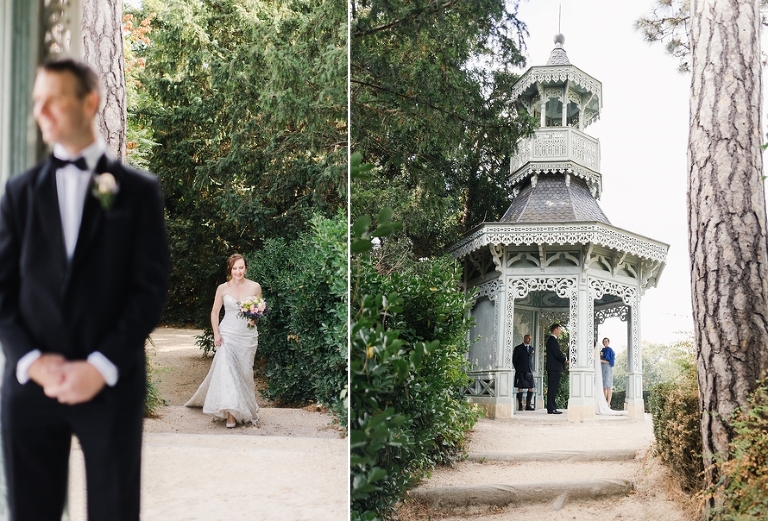 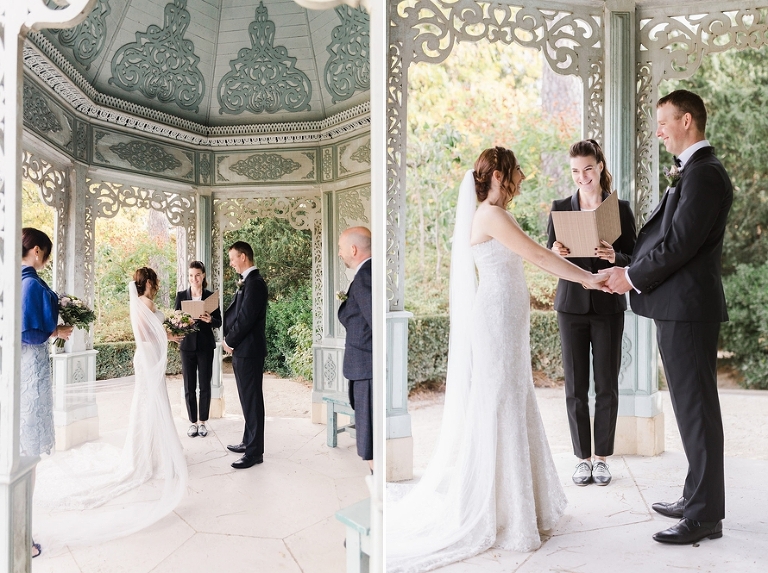 Natalie & Adam wanted their elopement ceremony in Paris to take place off the beaten tracks. They decided for a hidden gem that many people don’t even know about: Parc de Bagatelle. The couple had two guests attending. As a very small group we could use a small gazebo overlooking the rose garden for their intimate wedding ceremony. Natalie & Adam had their elopement in Paris in late summer which was the perfect season to use the rose garden for their photographs. But any other season also works well! Even if you are coming in winter when there are no flowers or leaves at all there are so many nice places to use in Parc de Bagatelle: There is for instance the Orangerie that you can see on the photos that we can use for you ceremony. 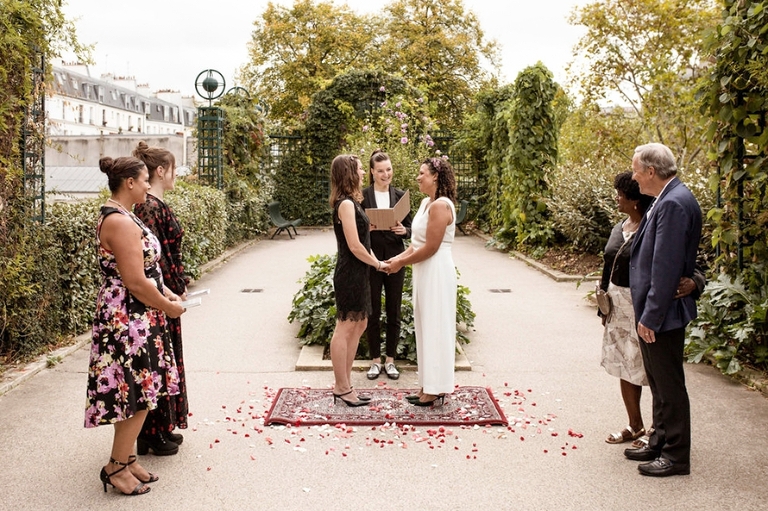 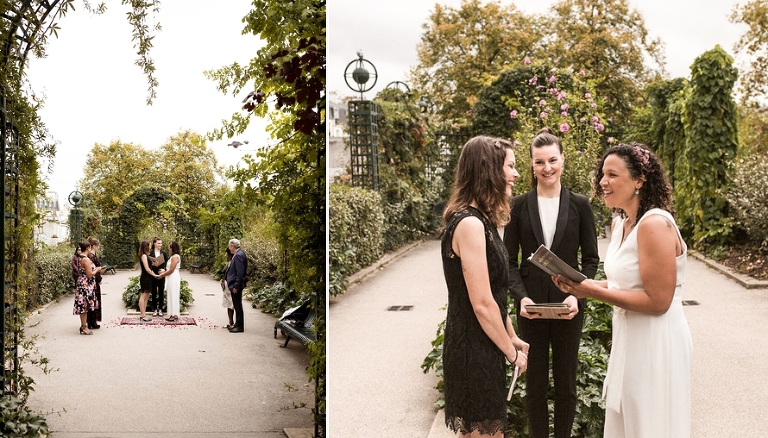 When Nicole & Sarah had made their first trip to Paris as a couple they just love strolling around different neighborhoods. On one of their walks they also discovered the Coulée Verte and instantly fell in love with this exceptional and offbeat park: An ancient aqueduct later turned into train tracks and today is a leafy and flowery walkway over the rooftops of Paris. When Sarah & Nicole came back to Paris to elope they did not need to think twice: They wanted to celebrate their ceremony at this magical place they had discovered together. As their Paris Officiant I was more then happy to officiate at this quiet, offbeat and very local Parisian place – especially as autumn foliage just had started and we could see the very first leaves changing colors. It was such a magical and unforgettable moment! 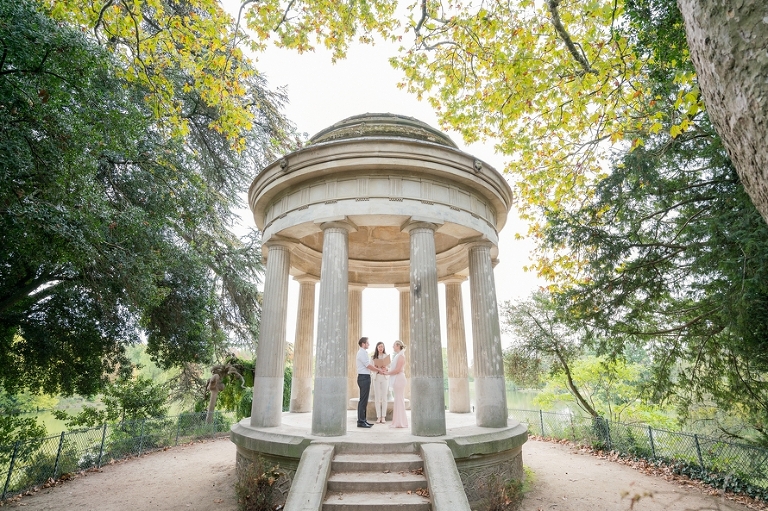 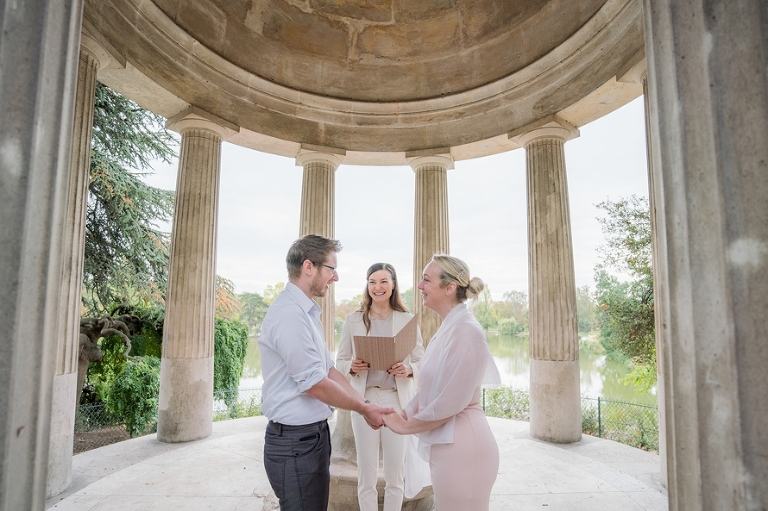 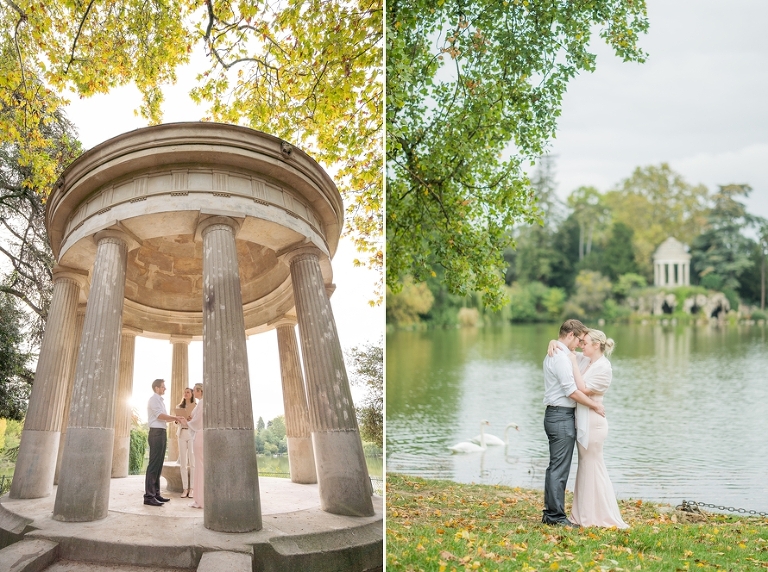 Wendy & Peter wanted to celebrate a very intimate renewal of vows in Paris: Just the two of them at a beautiful, romantic and hidden location renewing their promises. Wendy had found photos of the romantic temple when she did her research for her trip to Paris. When she told me about her idea I was thrilled. I knew this place very well because also I have chosen it for my civil wedding in Paris and have spend a magical day there celebrating with our close families – so as their celebrant in Paris I knew that his place was gorgeous and off the beaten tracks. When I met Wendy & Peter in the morning we practically had the park and temple just for us and were able to share a very intimate sunrise ceremony followed by some photos at the beautiful lake. 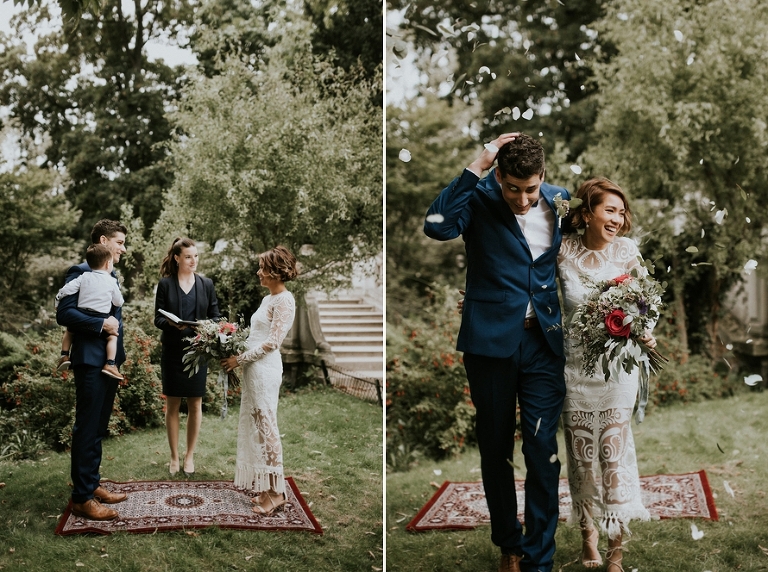 Nita & Ross were looking for something offbeat and wild romantic. They loved Parc Monceau because there are so many things to discover and play with in the park: a lake with roman columns, a whimsical bridge, stone gates, small pyramids, statues, a vintage merry-go-round and much more. We decided to do the ceremony on a lawn under a large tree near the whimsical bridge (see location 5). There was enough space for the couple and their little group of guests and their ceremony decoration – a red oriental rug – made a gorgeous contrast to the green surrounding.
If you want to have your ceremony with lots of greenery then you should plan your elopement from late spring to autumn to make sure that the trees are not bare. If you like to have your ceremony near one of the playful architectural elements then you can plan your elopement ceremony anytime of the year.