Elegant gay elopement in Paris at the Eiffel Tower

Raul & Chris did not plan their gay elopement in Paris in the first rush of their love. No, the same-sex couple is already together since 20 years – wow! So how romantic is that please? After such a long time together Raul & Chris are still so crazy in love with each other that they planned a sweet and intimate elopement in Paris. Chris says: “After 20 years together we are planning for more years of commitment and devotion with each other. I feel that marriage is extra special if two people are excited about being married after being together for so long.”

Raul & Chris decided to have their gay elopement in Paris, because the city of love played an important role in their love story. Paris was their first trip together as a couple 18 years ago. And now they came back to Paris to get married in the city of love. Raul says: “When we first came to Paris 18 years ago we both fell in love with the city. So we decided it would be the best place to exchange our wedding vows. “

The most important thing for Raul & Chris was to share an intimate moment for their Paris elopement. No big event, no guests, no frills – just the two of them totally focusing on each other. Raul says: “It was very important to have a one-on-one moment. Chris and I have gone through so much together in the last 20 years but it always has been just us. We have seen, done, laughed, cried and loved with just the two of us. To celebrate 20 years of us like this is real for me.” 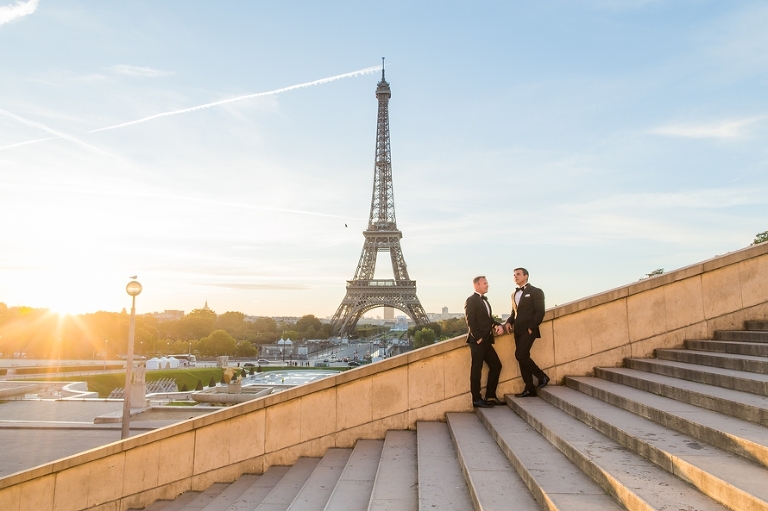 As their Paris Officiant I suggested to meet in the early morning hours to be as intimate as possible. At that time Paris is not so busy yet. By getting up early Raul & Chris were also able to enjoy a beautiful sunrise at the Eiffel Tower for a first few couple pictures. And they also enjoyed a few moments to connect with the place and with each other before getting married.

For their wedding ceremony I recommended Raul & Chris a calm spot at the Seine riverside. We were practically alone and enjoyed a fantastic view on the Eiffel Tower on this crisp and cool fall morning. The same-sex couple wrote their own and personal wedding vows for their Paris elopement. And they also chose a wonderful poem by Maya Angelou that I incorporated into their wedding ceremony. 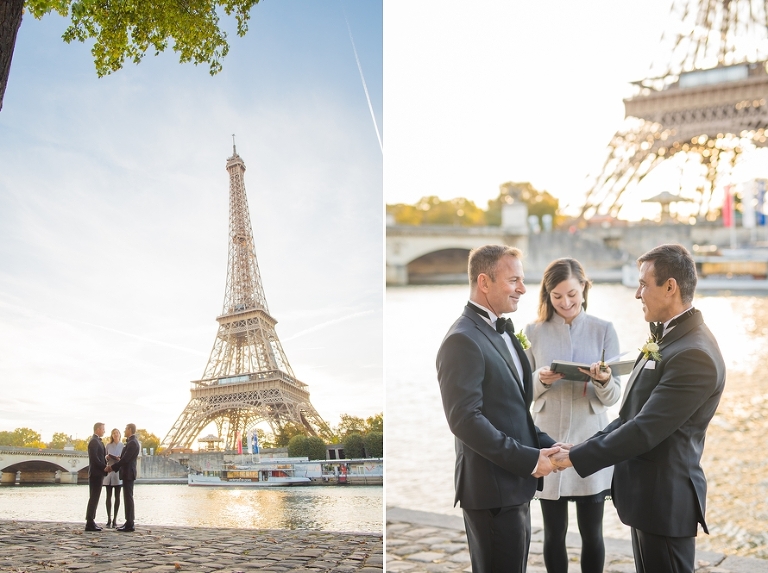 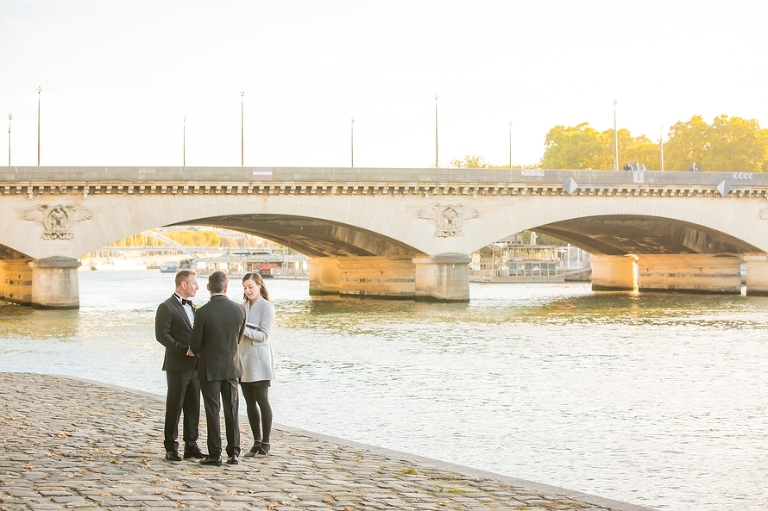 Personal wedding to commit to a life together

Raul & Chris also asked me to prepare a bespoke wedding ceremony for them by integrating their long and beautiful love story: Raul & Chris met 20 years ago in a club. They were both attracted by each other. But they were to shy to talk to each other or exchange contacts. So they left the club without knowing if they would ever see each other again. But luckily Raul & Chris both went back to the same club a few days later and saw each other again – yay!

So call it chance or coincidence. In any case the second time they didn’t let the opportunity pass again and exchanged phone numbers. The same-sex couple is inseparable ever since and was spending the last 20 years of their lives together. Chris says: “When we first met I always thought to myself: I love every moment we spend together. 20 years later I still have the same thoughts, even through the good and bad times of life.” 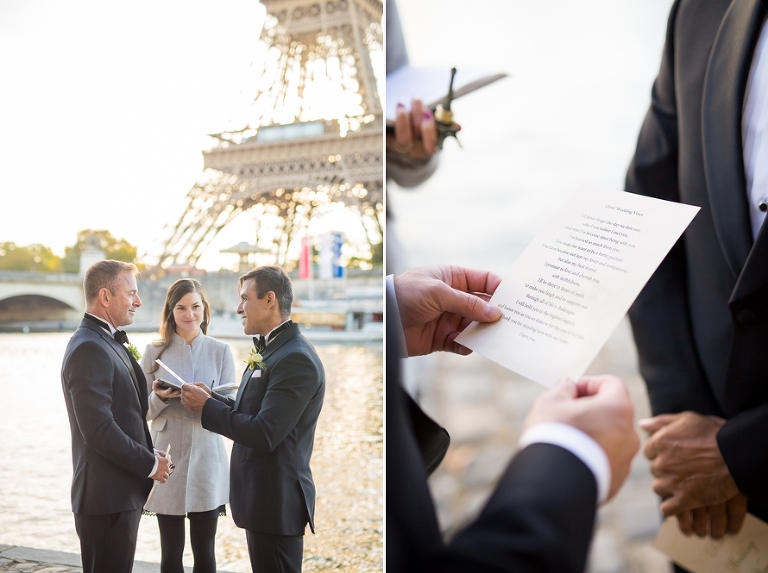 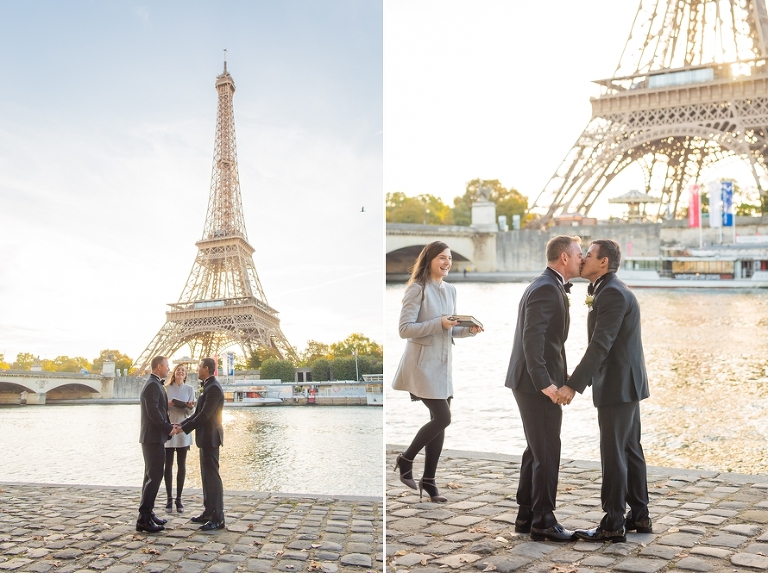 Champagne at Louvre to celebrate gay elopement in Paris

After their elopement ceremony Raul & Chris went to the Louvre to take some couple pictures together. The style they had preapred for their gay wedding in Paris was simple and elegant: They both wore black tuxedos, black bowties and black patent leather shoes. Raul & Chris combined their black outfits with white shirts and boutonnieres made of white roses. Very classy and très chic!

Raul & Chris also took a moment at the Louvre to cheer their glassed and sip a bit of Champagne to celebrate their Paris elopement! As their celebrant in Paris, I wish them a marriage filled with love and laughter – the two of them together through thick and thin! And I cannot wait to see them again in Paris – why not in 20 years for the renewal of their wedding vows?!? ,-) 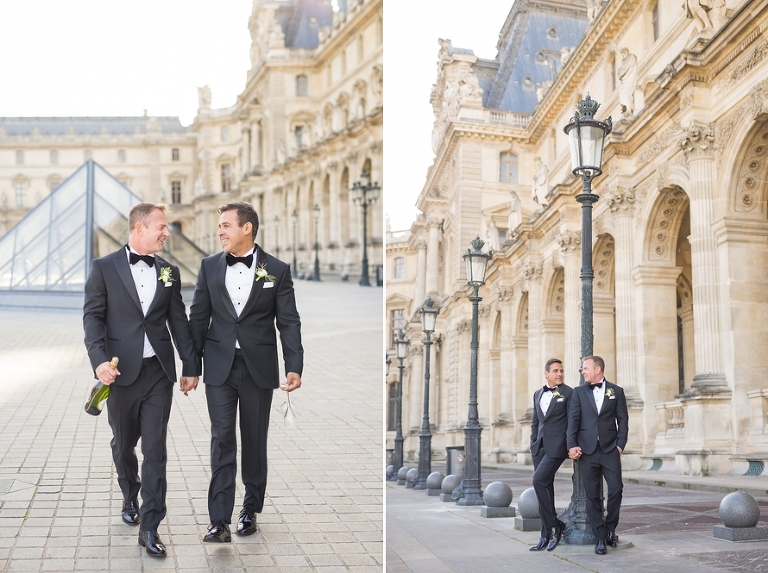 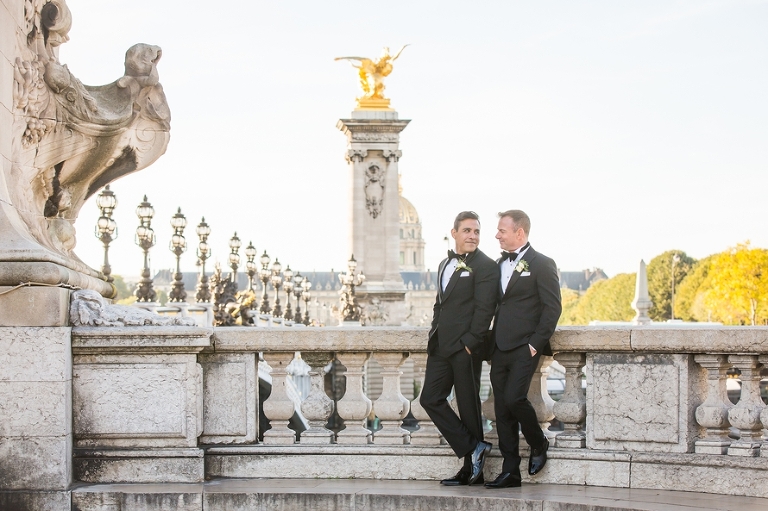 Vendors of this elegant gay wedding in Paris

So how is this New Year been treating you so far?

🗼Missing these moments in winter when you warm