When an event designer plans her own Paris vow renewal ceremony then it is surely a feast for your eyes! Maria owns her own event planning and design company in Vancouver, Canada. So when Maria prepared her Paris vow renewal she didn’t leave anything to chance!

Maria wanted to create a special day to celebrate her 25 years of marriage with her husband Tony. They wanted to celebrate a new chapter in their lives as a couple. Maria said: “Our children are grown up now. Now it is time for us as a couple! 25 years later we are ready for a new adventure in our relationship.”

Maria & Tony’s three kids accompanied their parents to Paris to celebrate their wedding anniversary. The children wanted to witness the moment when their parents renew vows in Paris during their vow renewal ceremony! 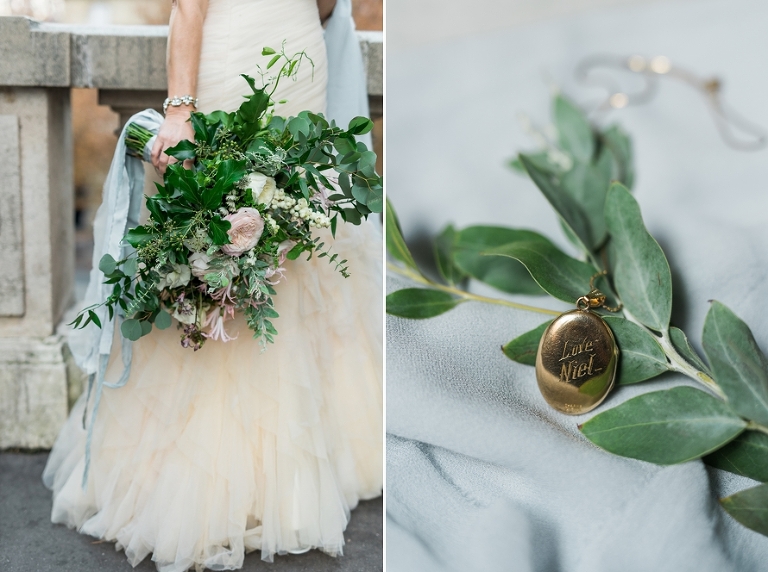 As venue for their Paris vow renewal Maria & Tony chose a winery – a hidden gem in the heart of Montmartre area. The winery was the perfect backdrop! Because Maria & Tony wanted to incorporate a wine ritual into their vow renewal ceremony: The couple had chosen a good bottle of wine, an engraved wooden box, postcards and letters of all family members.

During the vow renewal ceremony Maria & Tony were putting the bottle of wine, the postcards and letters into the wooden box. Together they sealed the box and decided to open it again in 25 years. So on their 50th wedding anniversary they will drink the bottle of wine together, read the postcards and letters and think back on 50 years of marriage. In the meantime the sealed wine box will be a constant reminder of their commitment and renewal of vows. 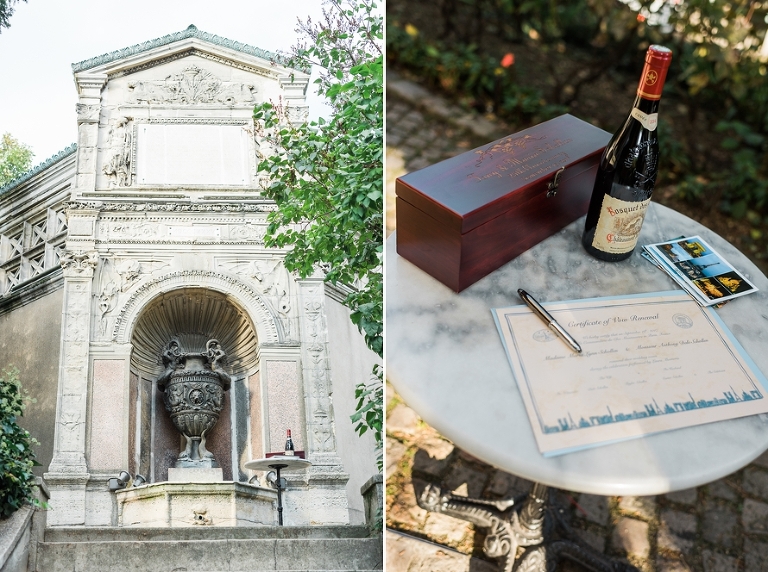 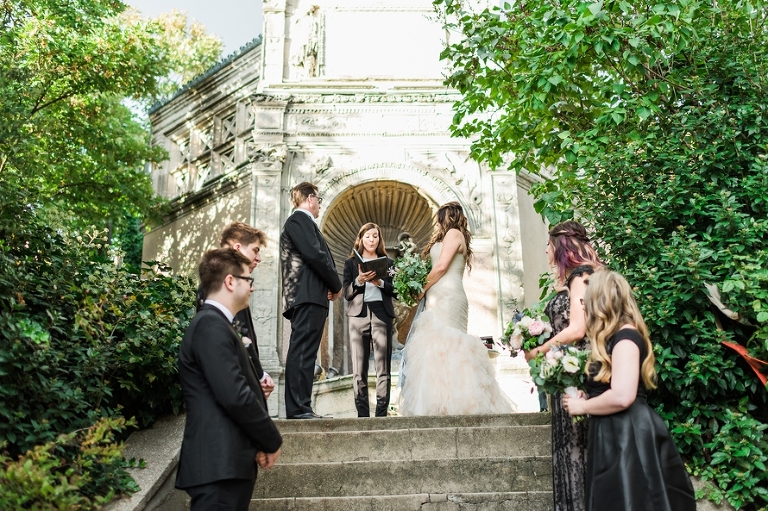 During their vow renewal ceremony Maria & Tony repeated once more their wedding vows to recommit to a life together and they exchange their wedding rings again. The couple asked me, their Paris officiant, to write a personal and unique vow renewal ceremony for them. As their celebrant in Paris I incorporated romantic readings and Maria & Tony’s incredibly romantic and funny love story.

Maria & Tony met 34 years ago on a party. They were locked in a room together by mistake. When they were released again after one hour they had become good friends – and they exchanged phone numbers. A few days later they called each other and started dating. Maria said: “Since we were so young when we started to date, we essentially grew up together and were able to create a solid foundation to our relationship before taking the next step.”

7 years later Tony planned to propose to Maria. He bought the engagement ring in the US and forgot to declare it. On his way back to Canada he was held by customs at the airport. He called Maria who had to bail him out. And as he was scared that she would be angry at him he proposed right in the customs area of the airport. She was still a little mad at him – but a few hours later Maria said “Yes” .

Maria & Tony got married with a classic wedding at the church followed by a big reception with all family and friends 25 years ago. Maria said: “My mom was a floral and cake designer and our wedding was gorgeous. At that time it was really not my thing and my mom did all of the planning. It’s funny that now 25 years later I am a control freak wedding designer myself.” 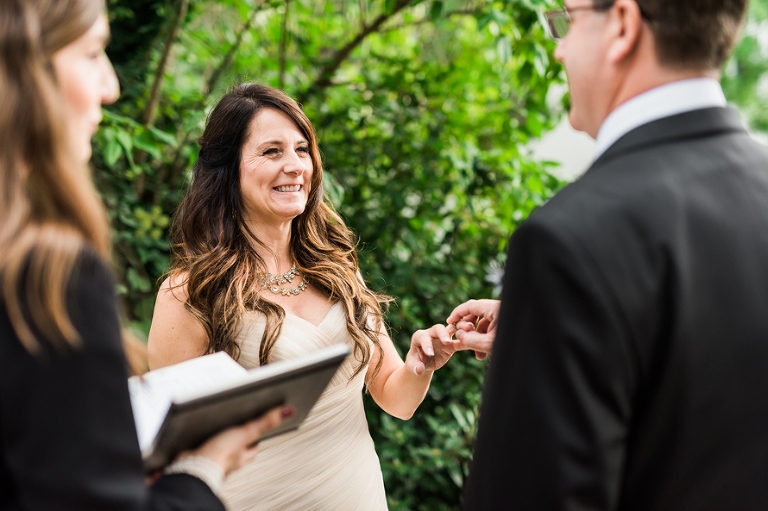 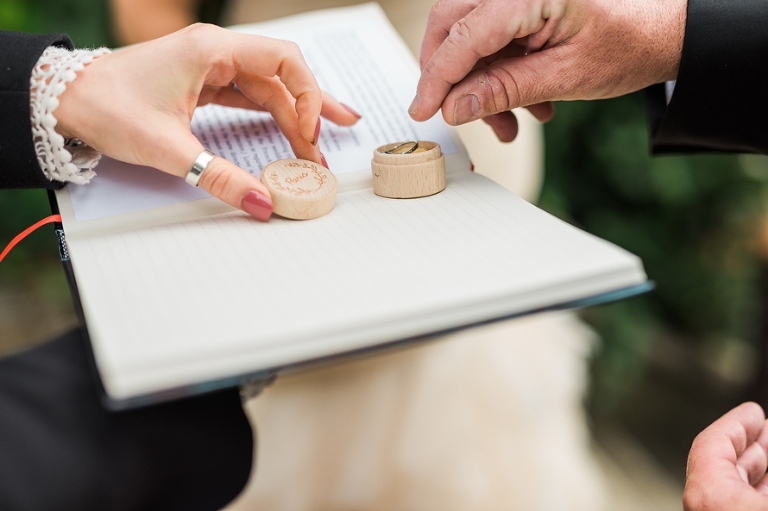 Wedding anniversary in Paris – celebration with the whole family

For their Paris vow renewal Maria & Tony wanted to celebrate differently than 25 years ago: They decided for a small and intimate vow renewal ceremony with just their children attending as they were unable to be there at the original wedding.

The couple decided for Paris because they fell in love with the city long time ago. When they first visited 17 years ago their were a young family, their kids still very small. Maria said: “We always talked about returning one day and this seemed the perfect time. We wanted to share our anniversary with our children and share Paris with them as well. It is a start of a new adventure for us.”

As their Paris Officiant I wish Maria & Tony all the very best for their new adventure and the next 25 years together. And when they open their wine bottle on their 50th wedding anniversary I hope they will let me know how the wine tasted! ,-)

Vendors of this Paris Vow Renewal:

“My husband and I (through a recommendation of our renewal planner Avec Weddings) hired Laura to officiate our 25th anniversary ceremony. From our first contact through to the day of our ceremony, Laura was very professional and guided us through a very personal and intimate ceremony that we wanted. We would recommend her to anyone who is visiting France for an elopement or wedding renewal. She did a wonderful job.”