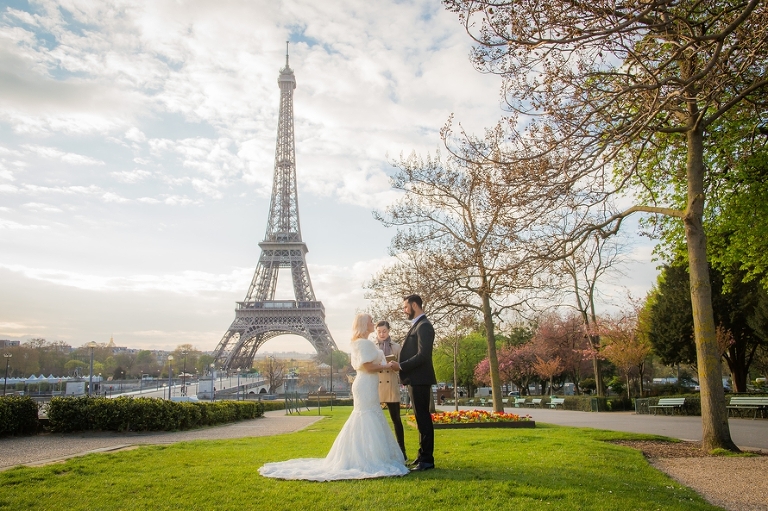 A sunrise Eiffel Tower wedding to make a fresh start

This sunrise Eiffel Tower wedding had a special reason to be: Love doesn’t always come easy. Sometimes love is overcoming obstacles and fighting to be together. Love sometimes means making a fresh start and letting the past behind to make your dreams come true.

At least that’s what Christine & Schalk experienced: They met each other 5 years ago and soon realized that they found their one true love. All seemed smooth and easy. So they got married one year ago back home and were walking on clouds. But then something unexpected happened. Christine said: “We had an unfortunate event happen at the wedding and a very very stressful year that followed!”

In fact the couple from South-Africa had to separate shortly after their wedding.  Their jobs were relocated to different places. Instead of leaving for a romantic honeymoon trip and enjoying their new life as husband and wife they had to part. Unexpectedly they had to face the stress of a long distant marriage. This was quite hard on the newly weds: Christine & Schalk felt sad,frustrated and all stressed out.

It took a while until they found a way to work things out. Things were calming and they were able to live together again. After that they decided to have a fresh start and do their wedding ceremony all over again. They wanted to exchange their wedding vows once more. This was a symbol for them hat their life as a married couple can finally start now. Christine said: “We decided to redo it all! To start a peaceful loving journey together, creating a new and beautiful memory and letting go of the past!” So the decided for a Eiffel Tower wedding.

It was natural that they even decided to exchange their wedding vows in their mother tongue Afrikaans. As their English speaking celebrant in Paris I didn’t understand a word of their wedding vows. But I still felt very moved. When Christine & Schalk read their personal wedding vows to each other it seemed like the whole tensions of the last year could finally melt away. The couple seemed to be able to make up for their past frustration.

Christine & Schalk completed their sunrise ceremony with couple pictures at the Eiffel Tower. Actually they started with a sunrise photo shoot at Trocadero and then we moved to a grassy spot nearby just at the foot of the Eiffel Tower for their wedding ceremony. It was such a nicely sunny spring morning and the first flowers were starting to bloom! And Paris Photographer Pierre Torset captured the fresh spring vibes and a stunning sunrise into beautiful pictures. 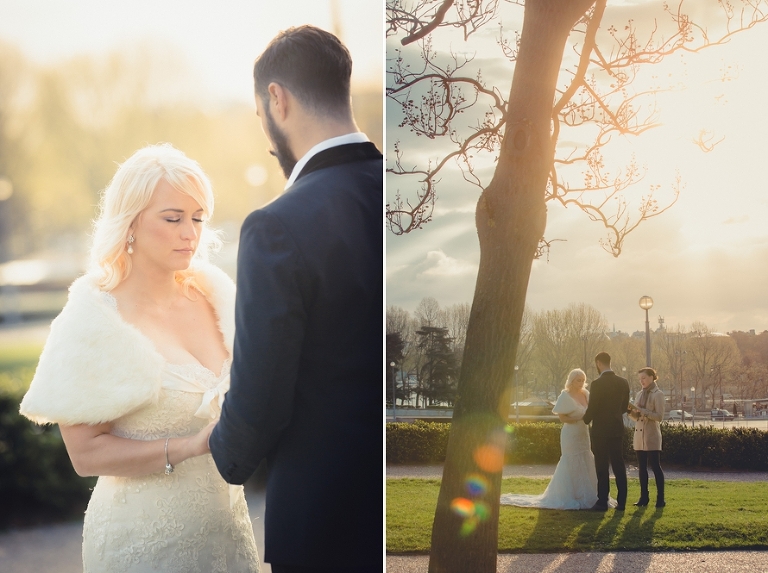 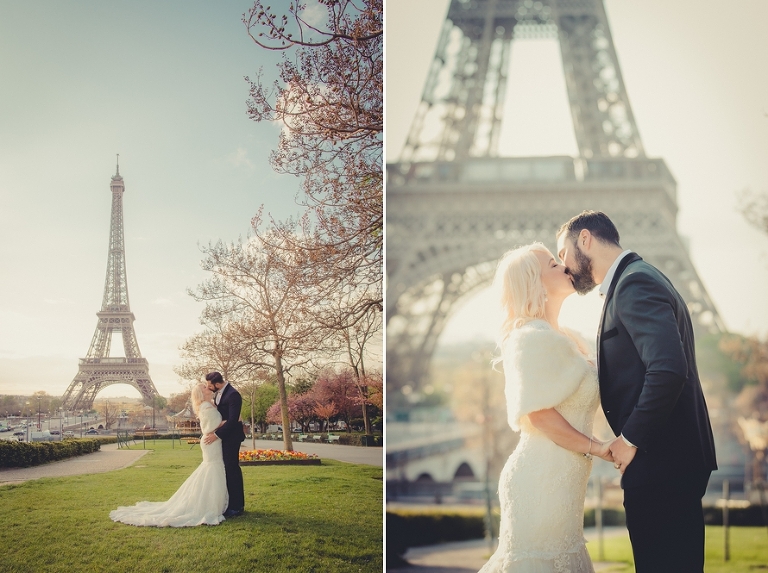 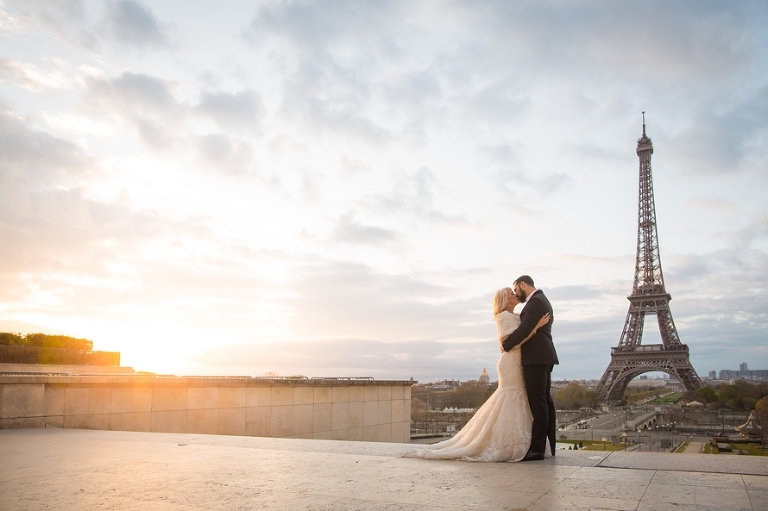 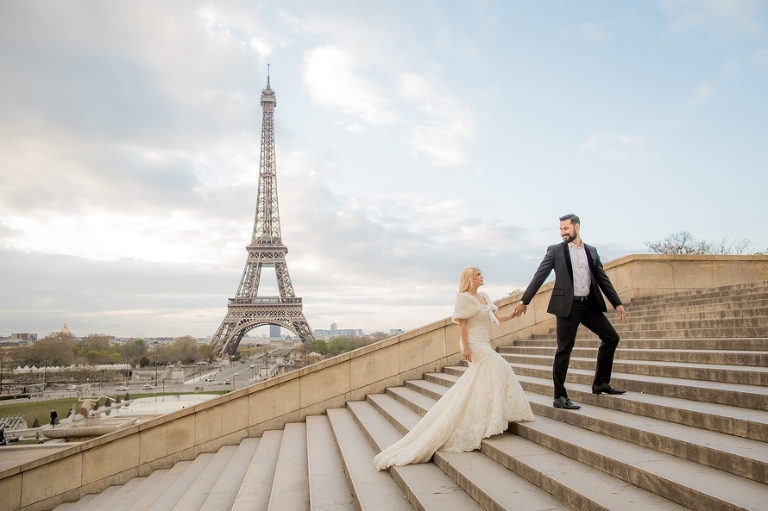 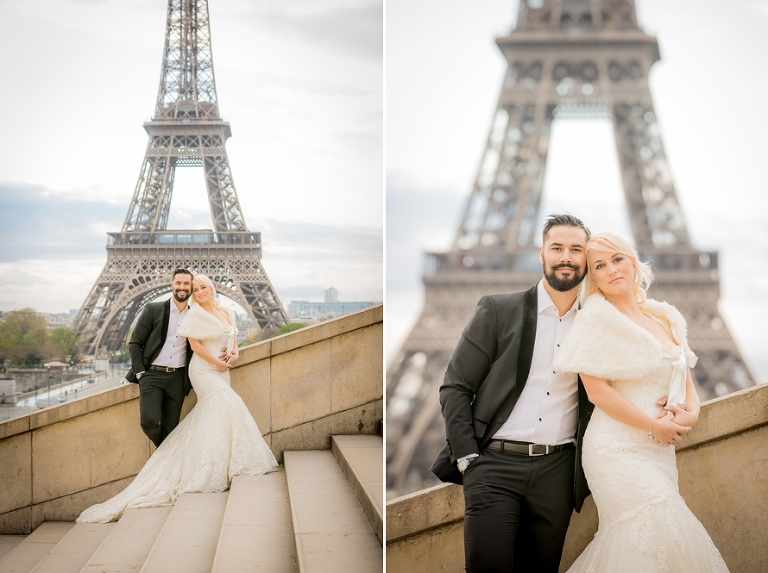