Vintage elopement in Paris with a rooftop view 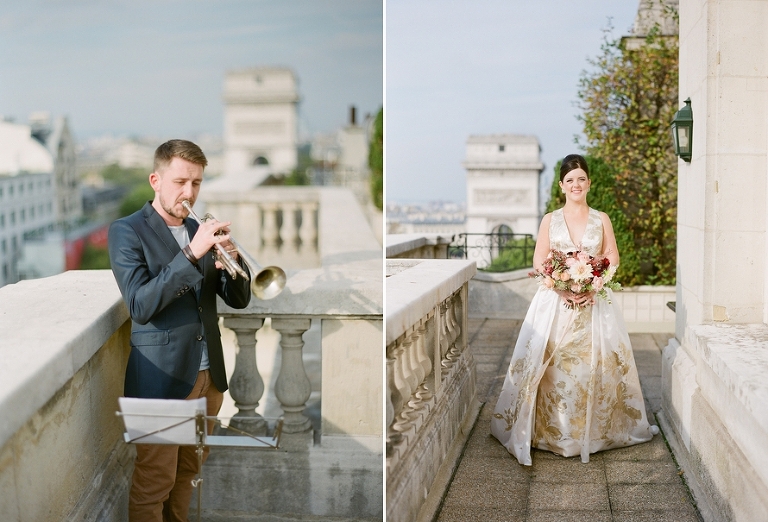 This vintage elopement in Paris will leave you breathless! A rooftop venue with a view over Paris, a tailor-made wedding gown, hand lettered invitation cards: Kristina & Derek realized a dream elopement in Paris. And because the couple loves all things old and nostalgic the vintage elements could of course not miss.

For their vintage elopement in Paris Kristina & Derek found a very Parisian hotel room with large windows, a chimney and ancient furniture. The room also had a large rooftop terrace with a view all over Paris: From the Eiffel Tower to the Arch de Triomphe. For their elopement ceremony they decorated the rooftop terrace with beautiful floral arrangements. To celebrate their vintage wedding in Paris Kristina had a special vision for her dress: She wore a vintage style tailor made wedding gown which had a special skirt and was all white and gold. 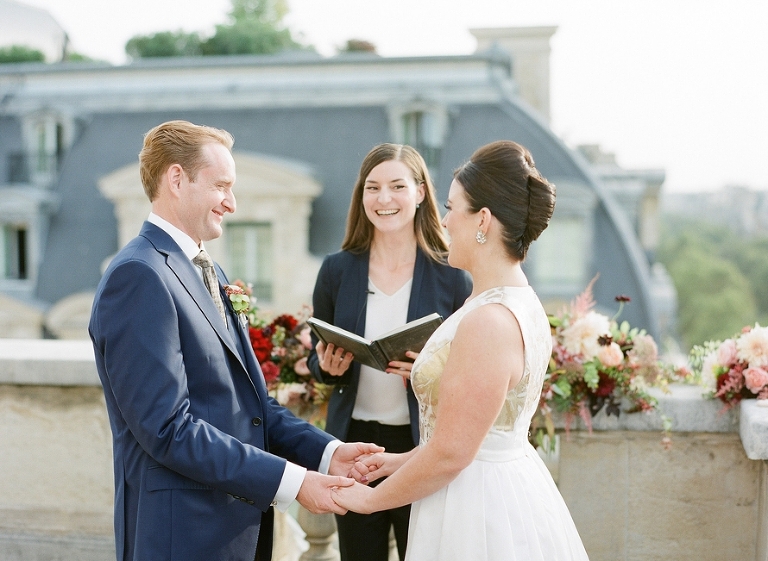 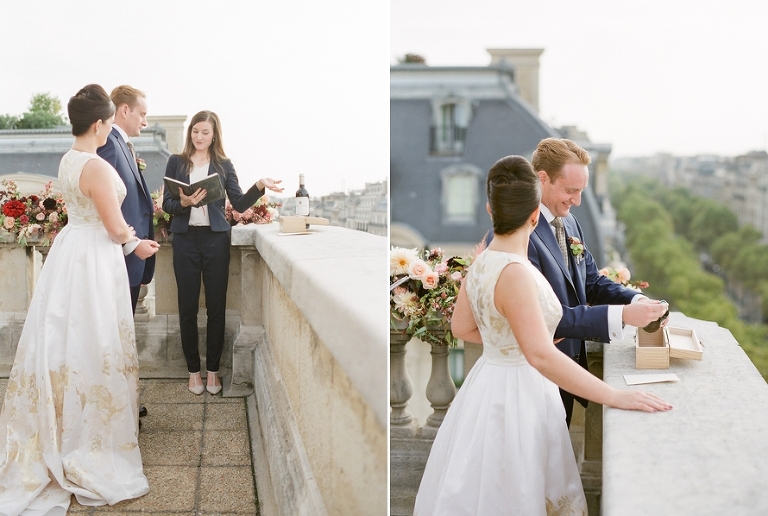 Kristina & Derek love listening to oldies. Clearly this element could not miss during their vintage elopement in Paris. So a trumpet player was playing their favorite songs by Sam Cooke and Louis Armstrong when Kristina walked in for the elopement ceremony. As their celebrant in Paris I performed a romantic and personal ceremony for them. The coupled wished to include some religious elements. So we decided to bless their union with a prayer before the exchange of wedding vows.

Kristina & Derek are also real foodies and love good wine. So as their Paris officiant I suggested a wedding ritual that they both loved: The wine ritual. The couple chose a bottle of good wine and a wooden box with their names and wedding date engraved. During the ceremony they were putting the bottle of wine into the box and sealed the box. Like good wine love will deepen and mature over time as they say. So the couple promised to only open the box again in 10 years. So on their 10th wedding anniversary they will drink the wine and let their memory wander back to their vintage elopement in Paris. 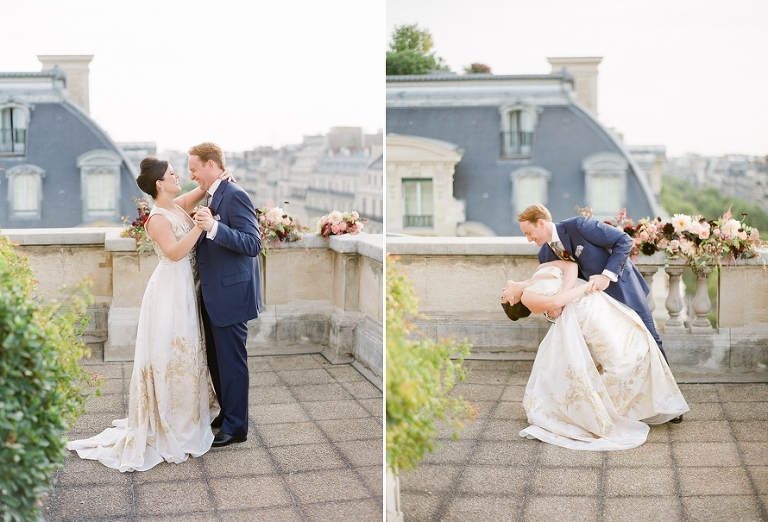 Elope in Paris: Celebrating in the city of love

I also included Kristina & Derek’s beautiful love story into their wedding ceremony: When the two of them first met over 2 years ago the sparks started flying immediately between them. For their first date they met in a restaurant and planned to go to a concert later. But they actually never made it to the concert because they got so caught up into their conversation. After their first date that they saw each other almost every day and quickly fell in love with each other.

Not even one year after their first date Derek proposed to Kristina: One evening they sat in the backyard of their house, listening to music and having a drink. When their favorite song started playing Derek went down on one knee and asked Kristina to marry him. After their engagement the two of them decided to plan a vintage elopement in Paris. Paris seemed to be the perfect placde for what they had in mind: They wanted to completely focus on each other and celebrate their love in the most romantic city in the world. Kristina also said: “Paris complements our lifestyle in our hometown New Orleans which is influenced by French culture, savoir vivre and also French cuisine and wine.” 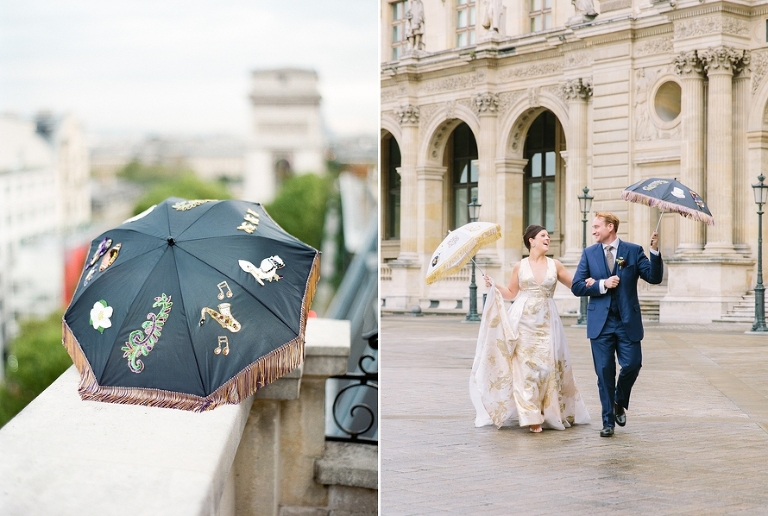 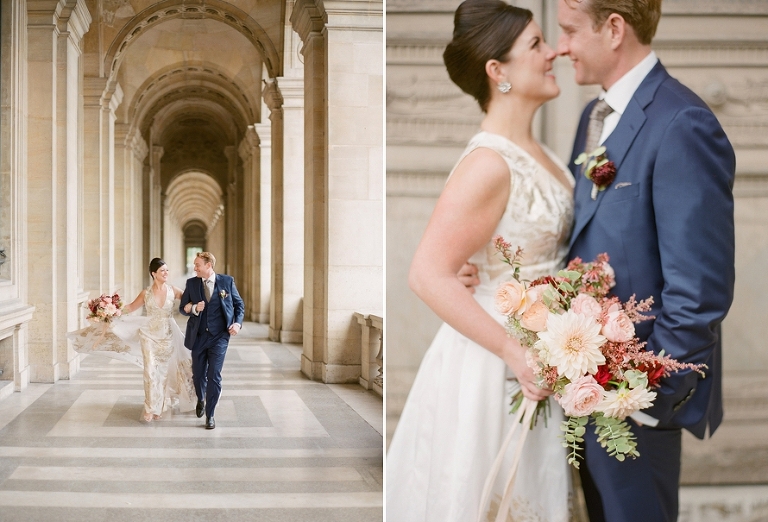 Vendors of this vintage elopement in Paris: